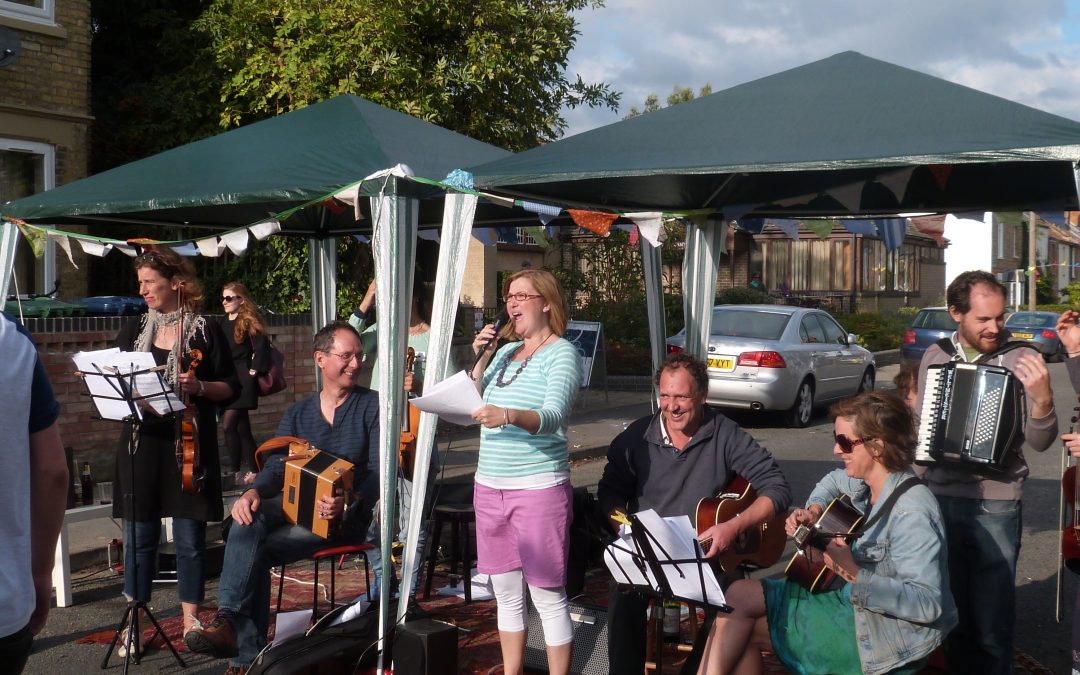 “You can muffle the sound of the drums, you can loosen the strings of the lyre, but who can stop the skylark from singing?”

Over the summer I’ve been making music round campfires, in streets and churches. In churches there’s been a lunchtime 40’s Jazz-fest (including some daring improvs) and an evening of Romantics like Brahms and Schubert, and on the street this weekend, to finish the outdoor music-making, a ceilidh on the street outside my house. In the garden meanwhile, we have watched Pobbles, our last pekin, hatch out two new chicks – both girls, both Rhode Island reds. The eggs came from John Marfleet – the man who tunes my piano (and has done all my life!) who happens also to breed fancy birds. Thank you John.

I think this quote from the Prophet makes a good link between music and chickens. The opening chapter of my ‘Chicken Coops’ book contains a section on chicken calls (Gallus gallus has, according to the experts, a greater variety of calls than any other bird). Each chapter opens with a song-quote about chickens ‘There aint nobody here’ etc. Once you start looking, it’s amazing now often chickens turn up in songs, especially of the cheekier variety.

What Gibran’s quote is about, I think, is something about the way voices (including humans’) connect us with nature and with the greater cosmos. We clever humans can create all sorts of sophisticated sound-machines – from drums and lyres it is a short journey into MP3-players, i-pods, mobile phones and all. But they are still vulnerable to neglect (that un-tuned piano in the corner of the living room; that old i-pod already stashed at the back of a drawer), or worse still to repression from those who regard music as a threat. I have had the privilege of singing in environments where the drums have been muffled and the lyres unstrung in this way.

The first was just after leaving University, visiting the Czech Republic (where my father had come from in 1938) in the 1980’s when the Soviet regime was still in place. My friends working in the Prague Opera House were perfectly accustomed to delivering quality renditions of operas by Janacek or Dvorak (the political messages therein carefully edited, in keeping with Communist ideology). But away from the cities, in their country dachas where they grew their vegetables (few being available in the Prague grocery stores), they dared to create music forbidden by the authorities. Early on a Sunday morning, I followed the small crowd, walking in silence to the dilapidated village church where we sang High Mass in fulsome nineteenth-century Czech settings (I understood only the gist, because I was familiar with the service, but managed to sight-read a convincing-enough rendition of Czech). And at night I listened to the same people singing Czech folk ballads around the camp fire. It was in these second settings that I heard their stories of loss and repression – after a long, melancholy song (intricately harmonised), someone would break off and tell me how they longed to travel to America to get better training as a Chorus master, how their grandfather’s great novel had lain unpublished for fifty years, or how they had been forced to join the Party in order to qualify as a doctor. I didn’t know how to help them; I cried.

Then all of a sudden the Velvet Revolution had happened. The Pope was in Prague, overseeing a mass, mainstream conversion from Communism to Catholicism and my friends were all rushing to leave the country. Soon enough, Latin Mass was being sung in all the churches and somehow the heart-felt passion had left it. Over time the traditional folk songs were replaced by Simon and Garfunkel and Bob Dylan.

Music is all over the place in twenty-first century Britain; even if we don’t actually make it with an instrument, we still reckon that we ‘own’ it in some way by listening to it. In our overtly consumer age, the whole ‘favorite music’ thing is essential to our idea of ourselves as individuals, as creative beings. Are you into Lady Gaga or Katy Perry? With the first you identify yourself as quirky and alternative (if not downright rebellious), with the second you show you are fun-loving and unthreatening. Musically, I’d say, there’s a surprisingly small gap between the two artists, but then it’s not only music we’re talking about…

Which provides another angle on Gibran’s words: when all the production-value thing is removed – the costumes and the props and the audio-conversion paraphernalia, what do we have left? Who knows? No-one has the least idea what Lady Gaga would sound like if she had to stand up, unaccompanied, on some silly TV talent show. Most likely she’ll never suffer that humiliation. But what does it say about our culture that our music cannot exist without the huge great machine surrounding it? I think it means we have lost that authenticity, that survival-instinct that Gibran hears in bird-song. Perhaps we have lost the life-force itself.