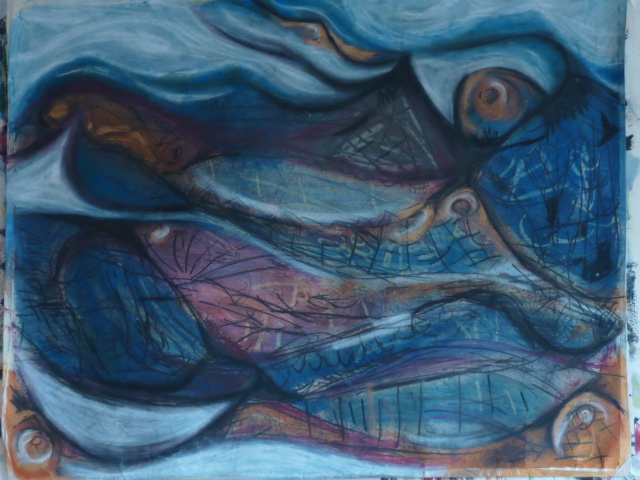 Like many family members, Michael regards it as his job to encourage his wife’s singing with exuberant vocals of his own, in his case out of tune and at a belt. He is paying extra for these singing sessions on top of tens of thousands for 24 hour care at home, and maybe he thinks singing as loud as possible will get him his money’s worth. The trouble is that Paula, as a victim of two neurological diseases, doesn’t necessarily have the energy or mental focus to join in. In fact, she is quite inhibited by her more able husband’s musical offerings. Which is why a spouse-free day is such an opportunity.

The carer meets me at the door and immediately gives me the cash that Michael has left in payment for the session.

‘She is ready for you,’ she says and starts up the staircase, presumably to take advantage of this hour that Helen is occupied. Suddenly she stops and turns back,

‘You know, we are quite worried about Michael. He’s been having some falls…Of course, he doesn’t want people to know. But I think he might be quite sick…he keeps getting muddled; forgetting things…’

‘Have you suggested he see his GP?’ I ask and her eyes swing to the ceiling in response. ‘You know, if he is ill – it’s really important for Paula, and for you.’ Michael employs three carers – two from Zimbabwe and one from Jamaica. I wonder how comprehensive their contracts are; how dependent they are on his organisational skills.

‘Does he have the same GP as Paula?’ I ask. ‘Maybe you could mention your worries when you take Paula in…’

‘Yes – good idea,’ she says, and hurries on up the stairs.

In the living room, Paula is occupied with a plate of cut apple on the table beside her, taking time to select the palest slice. I get out the guitar and warm up with nursery rhymes that I feel embarrass Michael but delight his wife. My experience over the months I’ve been visiting is that Paula has a great store of songs (more than me), and today I want to find out if she and I can share a few more. The one I have chosen came via a singing student whose  mother apparently sang along to The Seekers’ version. I checked the long list of cover versions but couldn’t think which one I might have heard. It is one of those folk songs that seems to have travelled back and forth over the Atlantic for centuries, entering deep into our subconscious.

The Water is Wide, I cannot cross o’er, And neither have I wings to fly, Give me a boat that can carry two, And we shall row, my love and I…

Paula has stopped chewing her apple and gazes unblinking at my mouth…she is listening hard. I fancy she may start to join in if I continue, gently,

A ship there is that sails the sea, It’s loaded deep as deep can be, But not as deep as the love I’m in, I know not if I sink or swim…

I get to the end of the song and suspend instrument and voice, wondering what Helen’s state of mind might be. Her look is fixed, just like before.

‘I thought he had gone,’ she whispers; then pauses for a long moment. ‘…The trouble is knowing WHEN… I think it will be he who goes first.’ I stay silent and still, trying to connect with her. ‘Michael and I keep dying and coming back to life again, you know.’

”Tell me – do you know people who do it well?’ I shrug her my hopeless lack of experience.

‘People say 15 feet is good,’ – her voice is bright now, her eyes sparkling.

‘Deep or wide?’ I respond